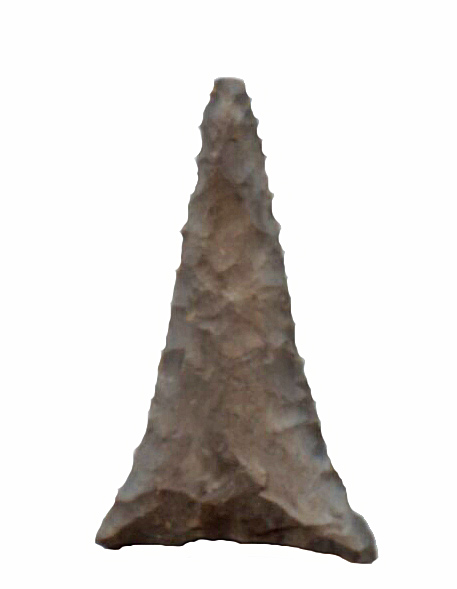 General Description: The Hamilton is a small early triangular arrow point that has straight, recurved or slightly concave sides and a straight to slightly concave basal edge.  Some Hamilton points have fine serrations on the blade edges.  Many examples are very thin and exhibit the finest quality craftsmanship and flaking skills and technique.  It is believed that the Hamilton evolved from the Camp Creek point type.  Some North Carolina and Tennessee specimens have a special constricted tip called the "Donnaha Tip".  Extreme delicacy and symmetry are characteristic of the type.

The Hamilton arrow point can range in length from 22mm to 55mm and the base dimensions typically range from 12mm to 23mm wide and the thickness ranges from 3mm to 6mm with the average being 4mm.

The Hamilton is a late Woodland point type assicatied with the Hamilton culture.    It is typically found in Tennessee, Kentucky, western North Carolina, southern Ohio, southern Indiana and northern Alabama.

First recognized by Madeline Kneburg, the Hamilton was named by Thomas M. N. Lewis (1955) from examples which Lewis found in Hamilton County, Tennessee and documented in the paper "The Hamilton and Eva Type Points of Tennessee",  Bulletin of the Oklahoma Anthropological Society , 1959, issue 3.


About the Point Above : (Shown Twice Size) The point pictured at the top left of this page is an average sized classical example of the Hamilton Arrow point with a normal concave basal edge and concave blade edges. This specimen is made from a black flint which is highly patinated. The point measures 31 mm in length, 18.1 mm at the widest point (across the base) and is a very thin 4.1 mm thick mid blade. The point tips thin down to 2.7 mm in thickness near the tip. The base concavity is 2 mm deep. This point was a surface find from Tennessee. Catalog Number 184-8-C