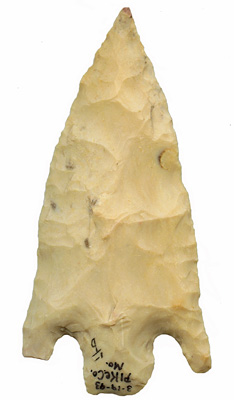 General Description: The Mehlville point type is a large triangular point which has basal notches and a short rectangular stem which tends to contract slightly.  The blade is broad and triangular in outline usually having convex to recurved blade edges.  The shoulders are deeply barbed.  The barbs are squared, rounded or pointed and on some specimens droop inward.  The basal notches are V-shaped.

The Mehlville's primary use location was West-Central Illinois and the northeastern part of Missouri.  The major area of distribution is near St. Louis and the mouth of the Missouri River and generally around 100 miles from that point.  It has been reported that some Mehlville point may be found in northern Arkansas.

The typical material used in manufacture was Mozartkite and Kaolin chert or other white cherts.

The type was named by Gregory Perino from a point type found in a cache of eight points near Mehlville, Missouri in 1970 by David Hoefelmann in a road grading operation.

About The Point Above: The magnificent Mehlville point pictured at the top of this page, is from Greene County, Missouri and is from Pike County, Missouri and is from the former Tom Davis collection. It appears to be made from what appears to be a satin cream colored  Kaolin chert which has a few darker tan inclusions.  The point is 87 mm long, 44 mm wide at the barbs and is 10 mm at its thickest point (at mid blade) with the blade being 6.5 mm in typical thickness. The stem is 16 mm wide with the base and notches showing no signs of being ground. The left wing or barb which is the short wing may have had ancient barb damage.  Catalog Number 162-155-V