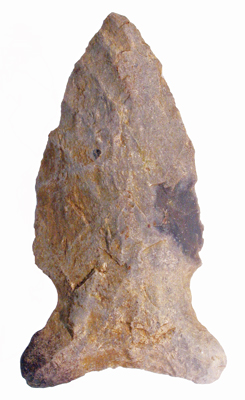 General Description: The Rowan point is a small to medium sized dart point with wide side notches and a straight to concave base .  Notches are large and ground on both faces.  The base is also ground.  In some examples, the notches are extremely elongated and shallow with slight shoulders and prominent tangs or ears / auricles.

The blade edges are straight or convex and sometimes serrated.  The distal tip is acute or pointed.  Nearly all examples have a flaked bevel on at least one blade edge.  Some specimens are flattened with a flaked bevel on three or four edges.  In addition to ground notches and base, the tangs are always thoroughly ground and rounded or somewhat pointed.  Most tangs and tips are quite thin.  Many examples are lightly ground over the entire hafting area  on one or both faces.

Rowan points are made by random percussion flaking with secondary retouch.  Beveled blade edges are steep or shallow and are often made by fairly good parallel oblique flaking over random flaking.  Bases are thinned by removal of several vertical parallel or random flakes followed by grinding which obliterates some or all of the signs of flaking.  Notches are formed by removal of several percussion flakes followed by grinding that leaves few flake scars.

The Rowan point is usually made from chert, rhyolite, silicified shale and quartzite .

The Rowan point type has been found in North Carolina, South Carolina, Virginia, Georgia and Florida.  According to site reports, similar points have been found in other southeastern states and even into the Ohio River Valley.

On the basis of morphology , technology, and provenance, the Rowan points are assigned to the Early Archaic with an estimated date of 9,500 - 8,500 B.P. and may continue forward into the Middle Archaic period.

It is believed that the Rowan point type is technologically related to the transition stage of the Dalton-Meserve, Quad and Hardaway forms and into the Early Archaic corner-notched and side-notched forms.  Like any transition form of point, the Rowan possess features of antecedents and decedents.

Joffre Laning Coe's Halifax point type (1964, The Formative Cultures of the Carolina Piedmont, Transactions of the American Philosophical Society, Vol 54, Part 5, Philadelphia) seems to be related to the Rowan but appears much later in the Middle Archaic period.

The Rowan point type was named and described by Peter P. Cooper II for examples he found in Rowan County, North Carolina and published in the Central States Archaeological Journal, Vol. 17, No. 3.

About the Point Above: The Rowan point pictured at the top of this page, was found Durham County North Carolina.  It is made from light gray black blotched shale with some very small quartz  inclusions. Overall, the point measures 45 mm in length, is 25.8 mm wide (across the ears or auricles) and is  10.7 mm thick in mid blade. The concavity of the base measures 2.5 mm deep.  The stem measured from the shoulders is 14.5 mm long.  The stem is 16.6 mm wide at the notches. The notches are 15.2 mm long.  The tips of the ears thin down to 1.3 mm thick and the distal tip is 2.1 mm thick. The base is quite heavily ground as are the ears and the notches pretty much obliterating all flaking scars.  There is some fine parallel oblique flaking on the left side of the blade edge.  Only one side of the blade (not shown) has a steep bevel. Overall this a fine example of the type in typical material even though it has suffered a few dings and knocks over the many years. The Rowan type appears to be quite rare.  Catalog Number 187-12-C