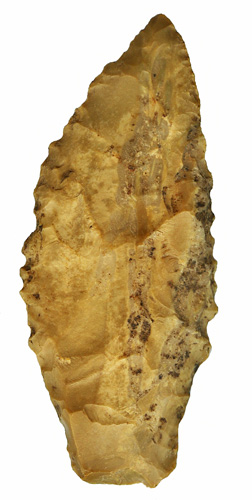 General Description: The Searcy type is a small to medium sized lanceolate point with a slightly concave basal edge and featuring a distinct contracting stem. The blade edges are excurvate, to straight to recurvate depending upon the extent and nature of resharpening. Many examples show delicate serrations above the hafting area. The majority of specimens are beveled. The shoulders are slight (formed by extensive grinding) to essentially nonexistent. Grinding on the stem edges and in the basal concavity is usually heavy however there are some specimens where grinding is absent. Due to their workmanship and style and the strata in which they have been carbon-dated, the Searcy type is quite definitely an Early Archaic point. Highly reworked specimens will show more pressure flaking and a steep bevel on the left side of each blade face. The cross-section is rhomboidal.

The Searcy is typically found mostly in the Ozark region of southwestern Missouri, northwestern Arkansas and parts of eastern Oklahoma.

The size of the Searcy point ranges from 50 mm to 84 mm in length, with the width being between 22 and 28 mm. Typical thickness is between 7 and 10 mm.

Perino postulates " Searcy points resemble certain contracting stemmed points found at the Rice site in Missouri (sometimes called the Rice Contracting Stemmed type) although the Calf Creek examples are more lanceolate in shape, narrower in width and longer than those from the Rice site.  The Searcy is also similar to the Rice Lanceolate which is also from the Rice site in Missouri.  The Searcy type also shares some traits with the Hidden Balley I types. The latter are more strongly barbed and do not feature the beveling and serrations found on most Searcy points.  All of these types seem to reflect regional variations in an early contracted stemmed tradition."

The point was named by Donald R. Dickson for examples found in situ within the Calf Creek Cave, Searcy County, Arkansas.

About the Point Above (Left): The Searcy point pictured at the top left hand side of this page, was found in Newton County, Arkansas. The point is made from light gray (especially near the tip) and tanish colored chert. The point in unifacially beveled on the left side of each blade edge. The edges are very finely serrated. The cross section in very much rhomboidal. Overall, the point measures 69 mm in length, is 25 mm wide across at the top of the hafting area and is 9 mm thick in mid blade just above hafting area. The base is 18.5 mm wide and the hafting area, which is ground is 25 mm long. The stem thickness is thinned to 6.5 mm. The distal tip appears to be rather obtuse from photograph's aspect however when the blade is laid flat on either face of the rhomboid it does not appear obtuse. Catalog Number 104-80-L

About the Point Above (Right): The Searcy point pictured at the top right hand side of this page, was found in Madison County, Arkansas. This point has been reworked after impact damage that reduced the oveall length and shape of the blade.  There is a large impact flute on both sides of the blade and the projectile point was resharpened to its current form.  As such I would not consider this a typical Searcy, especially from an out line perspective. The point is made from light cream and tan colored chert satin chert which may be Arkansas Novaculite.  The point is serrated, especially on the original blade edges. The right side of the blade  (especially above the hafting area) is unifacially beveled.  Howerver in the recovered and reworked area there is bifacial retouch.  Overall, the point measures 70 mm in length and was probably very much larger (I would estimate 85 mm), is 29 mm wide across at the top of the hafting area and is 8.3 mm thick in mid blade just above hafting area. The base is 16.5 mm wide and the hafting area, which is ground is 17 mm long. The stem thickness is thinned to 5.4 mm.  Catalog Number 150-26-D