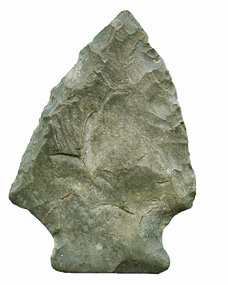 General Description: The Susquehanna Broad point is a medium to large size, broad, expanded stemmed point with tapered to clipped wing shoulders. Blade edges may be convex, straight or concave with asymmetry often present in larger examples, but less asymmetry than with Perkiomen points. The blades are thin for their size. Early examples often have ground bases and stem edges. The base is usually straight or slightly concave.  The stems are short and contracting which terminate in expanded flaring tangs or corners.

It is assumed that due to the asymmetrical nature of larger specimens, possibly caused by considerable resharpening, that they may have served as knives, while smaller, more symmetrical specimens may have been used as dart points.

The size range for the Susquehanna Broad point in the 26 mm through 156 mm range with typical average length being between 38 mm and 76 mm.

Some Susquehannas appear to have had their pointed shoulders removed, and these have been termed "Clipped Wing Susquehannas".

This point type represents an intrusive culture that made its way into New England and is thought to have originated in the Susquehanna River valley of eastern Pennsylvania.  In Pennsylvania, the preferred lithic materials were jasper, dark rhyolite, Onondaga gray and black flints or cherts, Flintridge flints and occasionally quartzite.

Some specimens have been found associated with steatitie bowl sherds.  The form and age of the Susquehanna indicate a relationship with the Ashtabula point type.

About the Point Above (Left): The point pictured above on the left hand side of the page is a medium sized somewhat symmetrical Susquehanna Broad point made from a dark brownish black flint which may be Normanskill (Hudson Valley, New York) in origin. The flint has a satiny patina and the point is very well made with very sharp edges and fine edge retouch pressure flake scars. If you look close, you will notice a long flute from the base to the number marker. The base has been ground as have the edges of the stem. The point measures 55 mm in length, 33 mm at the widest point and is 7 mm thick at its thickest point (the wings) with the typical thickness along the blade being 6 mm. This point was found in my yard in Milford (Woodmont), CT while digging a patio foundation. I wonder how this Normanskill flint came to reside here in Milford?  There must have been some trading or gifting of materials with bands to the east? Catalog Number 18-14-DV

About the Point Above (Right): The point pictured above on the right hand side of the page is a small sized somewhat symmetrical Susquehanna Broad point made from a dull, dark gray material which may be Normanskill (Hudson Valley, New York) in origin. The flint has a very grainy and highly weathered patina. The point is nicely made with very sharp edges and fine edge retouch pressure flake scars.  The point is very thin and flat.  The base and notches have been ground. The point measures 37 mm in length, 26 mm at the widest point which are the shoulders and is only 6 mm thick at its thickest point (the wings) with the typical thickness along the blade being 5 mm. This point was found in East Hartford, Connecticut at the old Forbes Farm. Catalog Number 480-13-C