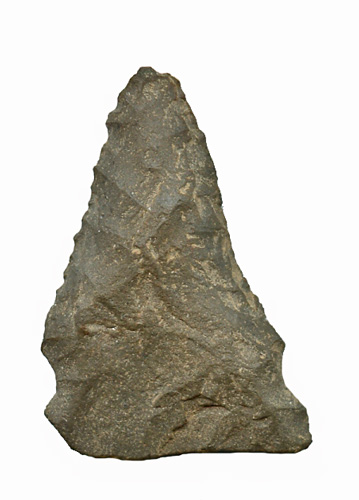 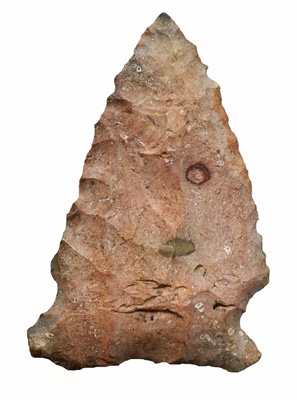 General Description: The Brewerton Eared Notched is one of four types in the Brewerton family of points. The Brewerton Eared Notched is a small to medium sized, relatively thick, isosceles triangular bladed point with excurvate blade edges. It has no true stem but very slight indentations which resemble side notches that are just above small extending ears or auricles. The ears are usually well knapped in a delicately chipped manner and extend beyond the base. The base is usually concave and may be ground. When the point is held with the distal end pointing down the overall outline resembles a cow's head.

The Brewerton Eared Notched is a minority or rare member of the Brewerton family comprising only 8% of the total point series recovered from the Robinson site. Ritchie suggests that the type integrates well with the Brewerton Eared-Triangle type and may have developed from it. Most examples from the original Brewerton sites are made of local flints, carefully knapped by pressure flaking techniques. In southern New England the point can be made from local materials such as quartz, slate and siltstone.

The Brewerton Eared Notched is not commonly found and is rather a rare point in typical assemblages . However its primary distribution area is in New York, Massachusetts, Connecticut, Rhode Island, New Jersey and Pennsylvania. It is possibly found in very rare occurrences in Ohio, Indiana, Virginia, Kentucky, West Virginia and eastern Illinois.

The size of the Brewerton Eared Triangle point can range from 19 mm to 63 mm in length with the typical point being in the 27 mm to 38 mm range. The point is usually one-half to two times as long as it is wide. Average thickness is 6 mm.

The Brewerton Eared Triangle was named by William A. Ritchie in 1971 for specimens found at the type sites in Brewerton, Oswego County, New York.   Ritchie previously called this point the "Eared Notch Point", 1940,  and the "Eared Side Notched Point" in 1958.

Personal Note:  This is a rather rare type of point and is somewhat confusing to me to differentiate it from the Brewerton Side Notched and especially the Brewerton Eared Triangle type.

About The Point Above - Left (Shown Twice Size): The small broken Brewerton Eared Notched point pictured at the top left hand side of this page, was a surface find along the banks of the Housatonic River, near the Baldwin Station Site, New Haven County, Milford, Connecticut. This point is made from a grainy  dark satin black shale material.   The left ear of this point has be historically fractured off and the tip has a ding which diminishes the overall length.  The edges are quite sharp however the right blade edge is reworked to the point of being concave.  The basal area is ground as are the ears or auricles and the areas just above the auricles. Overall, the point measures  31.4 mm in length, is 21.6 mm wide (at the auricles and probably was once 24 mm wide) and is only 6 mm thick.  The base is slightly concave. Catalog Number 415-0-1

About The Point Above - Right (Shown Twice Size): The larger Brewerton Eared Notched point pictured at the top right hand side of this page, was found in eastern Illinois which is the furthest western extent of the typical area in which the point type is found. This point is made from a light pink grainy chert material that has some round flint inclusions.  The material may be heat treated.   The right ear of this point has be historically fractured off and the right notch has been expanded to make a new ear.   The basal area is ground as are the ears or auricles and the areas just above the auricles. Overall, the point measures  50 mm in length, is 34 mm wide (at the auricles and probably was once 37 mm wide) and is 7.9 mm thick.  The base is slightly concave. Catalog Number 430-21-C